Most ecological theory has been developed for plants and animals. However, for the last years, technical progress on several fields, from computers to last generation DNA sequencers, has made it possible to collect large amounts of data on microbes at unprecedented rates. Microbial systems are also easy to sample massively and span along orders of magnitude of environmental factors. All these features make microbial communities excellent model systems to check general ideas on the function and structure of ecological communities and expand ecological theory. Most recent work on microbial communities describes spatial patterns, such as the species area relationship and beta diversity indexes, or take statistical approaches to describe snapshots of communities that are assumed to be at a steady state. Although temporal variation is fully appreciated and described for microbial communities, few attempts have been done yet to study the leading mechanisms driving community assembly in time. In this project we plan to explore the potential of classic island biogeography theory to gain insights into the temporal dynamics and regional scale distribution of microbial communities. As a starting point, we will take the simplest stochastic model formulation of the theory as a way to estimate effective colonization and extinction rates per microbial group.
We build on this simple model to include further realism in our modeling approaches. Our main goal is bridging the gap between empirical microbial ecology and theories of biodiversity organization in space and time. Three field datasets will be explored in a gradient from expected high stochasticity to more deterministic, and covering too spatial distribution patterns at a large regional scale within a short time interval.

Microbial assemblage from an alpine lake 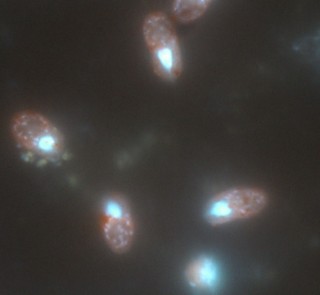