The candelabrum gorgonian (Ellisella paraplexauroides) is a rare coral of up to 2 meters high, with scarce specimens irregularly distributed along the Atlantic-Mediterranean region. In the Mediterranean there exists a single population, an exceptional relic of the Pleistocene that survives on the shallow platform (18-40 m) of the Chafarinas Islands (Spain), where the abundance of specimens forms a habitat of high ecological value, unique in this sea. Although this emblematic species has recently been included in the category of endangered or threatened species (Annex II Convenio de Barcelona, 2015), the most basic aspects of its biology and ecology remain virtually unknown. The only existing conservation study reveals that the population of Chafarinas is being seriously damaged by the local artisanal fleet, which operates daily with long-linings, gillnetting and trawling lines on the gorgonian bottom. In this BBVA project 9 national and international researchers from 5 different institutions are collaborating with the general aim of providing the necessary knowledge for the elaboration of a population restoration plan that will ensure the conservation of this vulnerable relic of the Mediterranean. The specific objectives are: 1) To describe the population structure of size and age classes; 2) To quantify and model tthe growth rate; 3) To quantify the incidence of mortality and its main factors; 4) To describe both sexual and asexual reproduction with a view to future restoration actions; 5) To elaborate a demographic model that serves as a practical tool to quantitatively predict potential threats to the population structure and future population responses after restoration-conservation actions. 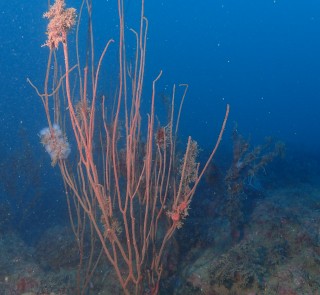