Naiads or large freshwater bivalves (Mollusca, Bivalvia, Unionoidea) are currently considered one of the most endangered animal groups of the planet, mainly due to the fragmentation and/or disappearance of their habitat and the introduction of invasive fish or other bivalve species. In Catalonia, the historical presence of 6 native naiad species is known, all of them classified as endangered species and with few or very few known populations. Following the available data, they are all in sharp regression.

The main goal of the NÀIADES project is to generate the necessary knowledge for the future drafting of the Naiads’ recovery plan in Catalonia, aiming to:

The first phase of the project has been focused in the two first objectives and in the zone of the north-east river basins of Catalonia, from the river Ter northwards.

For this purpose, field samplings have been carried out in the study area, consisting in prospection transects (114) and in the registration of other variables of interest (up to 24 quantitative and qualitative variables indicative of the river habitat). Resulting from this data, the river sections have been classified based on an index of interest for the conservation of naiads.

In addition, during the field campaign 150 samples of eDNA have been collected. The aim is to evaluate the capacity of current eDNA techniques to detect individuals and populations of naiads in a specific area. A reference database for the classification of naiads for future studies has been initiated, and the samples obtained through traditional sampling have been compared with those obtained from eDNA.

Referring to the conclusions, the project results show that, in general terms, all the native naiad species in the study area continue in regression and are in risk of extinction. At least two of them (Potomida littoralis and Anodonta cynegea) are in imminent risk of disappearance in the area, and by extension, in the whole of the internal basins of Catalonia, where no current populations are known. In addition of the habitat alteration, the water pollution and the introduction of invasive species; the results indicate that the decrease of water resources is the main factor affecting the current naiad populations.

The study has also permitted to delimitate the river sections of main interest for their conservation. Comparison between eDNA techniques and traditional sampling (prospections) shows a significant match between them (73%), confirming the potential of eDNA as survey technique. 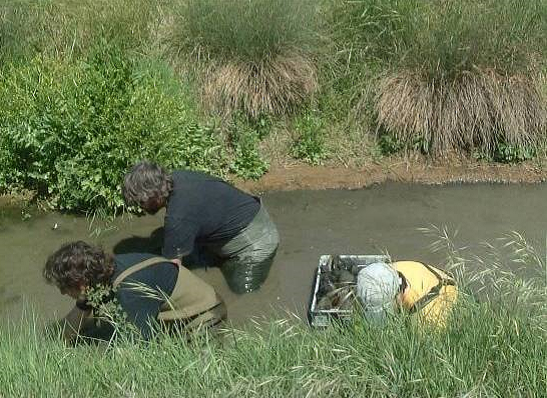