The main aim of the STRESSFISH Project was to provide the scientific basis for understanding the causes and effects of the native freshwater fish decline, currently threated of extinction. Our hypothesis was that this decline is the result of complex interactions among several global change driven environmental stressors. The project was focused on hydrological alteration; pollution and its interaction, poorly investigated and that we consider are of great interest. In order to address this challenging issue, we applied innovative concepts and methodologies stemming from two different but complementary scientific disciplines: fish ecology and ecotoxicology. This approach allowed us stablishing cause and effect relationships between environmental perturbations and their effects on freshwater fish by using a multiple lines of evidence approach.

As for the combined effects of mining and hydrological alteration, biochemical biomarkers indicated that exposure of mediterranean barbel (“Barbus meridionalis”) to prevailing Zn concentration, had deleterious effects. Moreover, effects measured at individual level, indicated that metabolic rate and critical swimming speed are also inhibited. On the other hand, investigations performed at community level revealed that the distribution of Iberian fish is related with life history traits and critical swimming speed. However, hydrological alteration is less important than other factors such as water temperature, climate, the longitudinal position along the river axis or the distance to the sea.

We applied effect-based monitoring techniques to investigate the reciprocal effects of the hydrological alteration and chemical pollution (heavy metals) on the mediterranen barbel (field experiment).
1-. The ecological impact of abandoned mines was aggravated by the extraction of water in the receiving water system: the natural communities were exposed to high concentrations of Zn as a result of the simultaneous action of the loss of circulating flow and the discharge of the mine effluent.
2. Chronic exposure affected all trophic levels: microorganisms, macroinvertebrates and fish. Zn accumulation was very high in the biofilm, followed by macroinvertebrates and barbel, causing changes in the composition of the microbial community (substitution of typical microorganisms from forested rivers by others resistant to metals and potentially pathogenic endosymbiotic parasites), decrease in abundance and biomass of macroinvertebrates, mainly herbivores; and negative effects on the general state (condition) of the barbel, in agreement with the Zn toxicity analyzed “in vitro” on different barbel tissues and the decrease in their swimming capacity and metabolic rates measured in the laboratory.
3. The experiment confirmed that the barbel plays a key role in areas with an excessive nutrient load since it prevents the accumulation of biomass in the river bed by a swept effect. High density of babel would lead to a> 70% decrease in biomass accumulation in the river bed (fluvial biofilm), ~ 60% reduction in macroinvertebrate abundance and changes in the composition of the microbial community.
4. The positive effects of the presence of the barbel are less evident in the contaminated sites. Control over macroinvertebrate density is less evident as the community is more altered. In relation to the biofilm, as its thickness decreases, the concentration of metals increases and the presence of metal-tolerant taxa increases.

We analysed the effects of hydrological alteration, pollution and its interaction at watershed scale (in the Ebro River). Fish populations along the main axis of the Ebro river are dominated in abundance by invasive alien species. In contrast, the upstream sections have more native species. Several factors influence this pattern and although the hydrological alteration produced by the reservoirs favors the presence of invasive species in the main axis of the river, natural environmental factors such as temperature are more important. 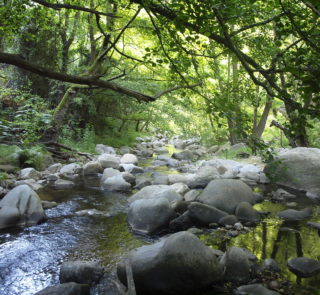