LimnoPirineus is a LIFE + Nature project aimed at improving the conservation status of species and aquatic habitats of European interest in the high mountains of the Pyrenees.

The project is financed jointly by the EU LIFE + program that promotes conservation actions and recovery of habitats and species of flora and fauna in protected areas of the European Union, integrated into the Natura 2000 network.

Among the habitats of interest, there are certain types of peat bogs, tufa-forming springs, rivers and lakes. The target species include the floating water plantain (Luronium natans), some amphibians like the common brown frog (Rana temporaria), the common midwife toad (Alytes obstetricans) and the Pyrenean brook salamander (Calotriton asper), besides the Pyrenean sculpin (Cottus hispaniolensis), which is an endemic fish from the Central Pyrenees. There are also some mammals that feed on the aquatic environment such as the Pyrenean desman (Galemys pyrenaicus), the European otter (Lutra lutra), and two species of bats, the lesser horseshoe bat (Rhinolophus hipposideros) and the alpine long-eared bat (Plecotus macrobullaris).

As part of this project, conservation actions will be taken in the National Park Aigüestortes i Estany de Sant Maurici, the Natural Park of Alt Pirineus, and the Estanho of Vilac located in the Val d’Aran.

Aquatic continental systems are scarce environments that occupy only 2% of the Earth surface but, at a global scale, are highly threatened. These are environments with a very specific and sensitive fauna and flora where threatened species are abundant.

In the Pyrenees, these wetland ecosystems are generally considered very natural landscapes. Despite their remote location, anthropogenic perturbations have not been absent. 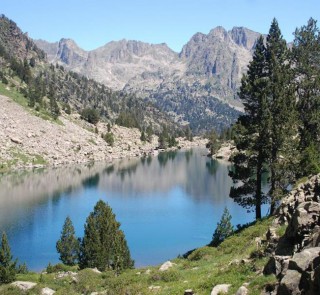