The Club Nàutic El Balís, is a point of reference for the nautical culture of Catalonia, this year 2022 celebrates the first edition of a Cycle of environmental talks, in the framework of its commitment to sustainability and care for the environment. The series of talks will be organized jointly with the Consejo Superior de Investigaciones Científicas (CSIC) and will have a total of six papers that, with the help of experts in the different fields, will deal with the protection of the environment from various perspectives. Some of the aspects that will be analyzed in the different talks will be posidonia, waste management, or actions to reduce the impact on the marine environment, as well as an environmental workshop for children, among other proposals.

The first talk, to be held on February 26, will focus on climate change, its causes and consequences, and will be given by two CSIC researchers: Dr. Miguel Ángel Mateo, member of the Board of Directors of El Balís, Director of the Aquatic Macrophytes Ecology Group, Blanes Center for Advanced Studies (CEAB-CSIC) and Associate Professor at Edith Cowan University in Australia, and Dr. . Fernando Valladares, recent King James I Prize for Environmental Protection, Director of the Ecology and Global Change Group at the National Museum of Natural Sciences in Madrid and Associate Professor at the Universidad Rey Juan Carlos in Madrid.

The different talks and workshops will be free and open to all interested people. 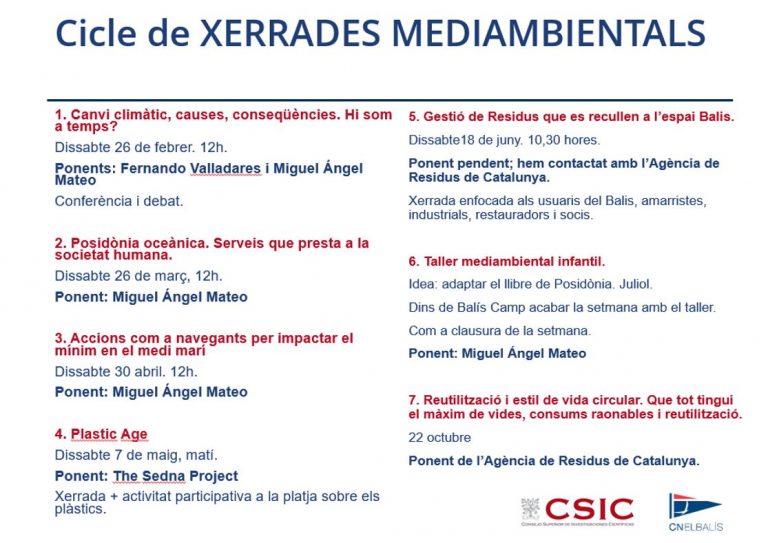 The Group of Aquatic Macrophyte Ecology (GAME-CSIC) is a research group of the Center for Advanced Studies of Blanes (CEAB-CSIC) focused on the ecology of natural systems such as marshes, mangroves and aquatic macrophyte forests in its key role in storing blue carbon and its value as a paleoecology record and importance in mitigating the effects of climate change.

It is currently a pioneering group in the study of the carbon cycle in coastal ecosystems dominated by marine phanerogams. Over the last three decades he has specialized in the study of the phenomenon of refractory accumulation of organic carbon for centuries or millennia in sediments of marine prairies in Mediterranean, subtropical and tropical environments.