Nine scientists from the  Universitat de Girona (UdG), Centre d’Estudis Avançat de Blanes (CEAB-CSIC), Institut de Ciències del Mar (ICM-CSIC) and the Universitat de Barcelona (UB) in Spain recommend excluding and moving offshore wind farms away from protected areas in the Mediterranean. The reason is the “serious impacts” that these facilities can cause on marine biodiversity and the landscape/seascape. These recommendations are included in a recent scientific study published in the scientific journal “Science of the Total Environment”.

The work takes as a case study the mega offshore wind farm projected in Cap de Creus and the Gulf of Roses, where eight marine protected areas converge. The scientific team presents a first assessment of the potential environmental impacts of large wind farms in the Mediterranean and, especially, in areas of high ecological fragility and high landscape value.

The study has reviewed nearly 150 papers from around the world. This diagnosis is intended to be useful for other places in the Mediterranean and other seas and oceans of the world where an exceptional natural heritage, a high biodiversity, the existence of marine protected areas, a valuable landscape, and important fishing and tourist activities converge at the local level.

With this study, the research team analyzes for the first time and comprehensively the impacts that these facilities can have on the entire water column: from plankton to the seabed, and from fish and crustaceans important for fishing to sensitive species and protected such as whales, dolphins, turtles and some seabirds.

The article highlights that mega offshore wind farms can entail “serious environmental risks for the seabed and the biodiversity of many areas of the Mediterranean due to the particular ecological and socioeconomic characteristics and the vulnerability of this semi-enclosed sea”. The authors of the study argue that “models such as those from the North Sea” cannot be imported directly, where many offshore wind farms have been installed. For the marine biologists and ecologists, oceanographers, geographers and physicists who sign the article, the Mediterranean is characteristic for its “narrower but more heterogeneous continental shelf and a higher proportion of threatened species and habitats than in the seas of northern Europe”.

Wind turbine structures are complex. Underwater, the “floating” wind farms, which are the ones that would mostly be installed in the Mediterranean, require large mooring and anchoring systems that can affect the integrity of the seabed. Marine mammals can collide with or become entangled in this wiring. In addition, the noise generated by wind farms accumulates with other sounds from human activities, such as navigation, and impacts the behavior of marine mammals.

These platforms are also a source of attraction for invasive species or opportunistic species that can alter the “fragile local balance of biodiversity”. This fact is “especially worrying” for researchers because the Mediterranean is the European sea most affected by the arrival of these exotic species.

Floating wind turbines, which are often more than 250 meters high, can modify the dynamics of local atmospheric and oceanic currents, and decrease the availability of nutrients for plankton since the decrease in wind causes less mixing in the water column. This fact can affect production in a sea “typically poor  in nutrients compared to other seas and oceans such as the North Atlantic or the North Sea”.

The study also claims the need to maintain marine biodiversity to fight climate change and mitigate its effects. According to the authors of the article, it has been shown that marine habitats have a great potential for carbon storage and constitute a solution to this problem based on nature itself. For the scientific team, ecosystems with greater biodiversity are usually more resistant to the impacts of climate change.

The authors of the article estimate that the ecological impacts of offshore wind farms would be “especially severe in areas of great biodiversity and fragility such as Cap de Creus and the Gulf of Roses”. Up to eight nationally and internationally recognized marine protected areas converge at this point. According to international agreements, it is necessary to protect a minimum of 30% of the seas and oceans by 2030. The researchers point out that, currently, in Spain this figure represents 12%. 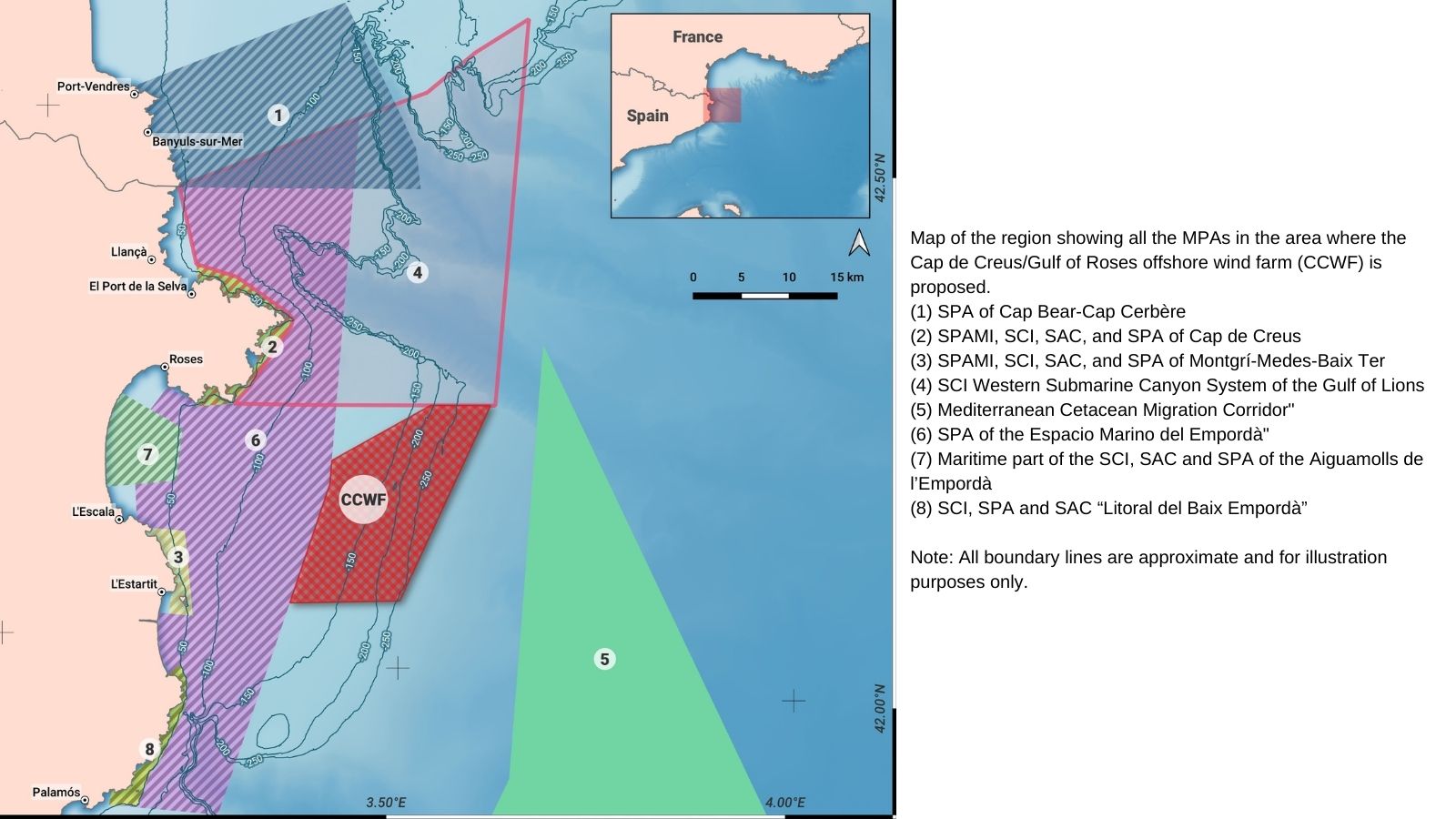 The study warns of the risks of accidents associated with extreme weather events, which will become more common with climate change. It also warns of the problems inherent to the wind turbines themselves, such as the fall of the structure into the sea and ship crashes. The scientific team emphasizes that these projects involve the industrialization of the coast in areas of high landscape value. On the one hand, it would be necessary to expand the capacity of nearby ports for logistics related to the construction and maintenance of offshore wind farms. And, on the other hand, the same ports would house the infrastructures for the production of energy from hydrogen, which may entail specific risks to the environment related to the use of water and land, the release of brine or hydrogen leaks, among others.

Finally, the study warns that the impacts will not be limited to the coast, but will also affect onshore, because of the need to accommodate infrastructure (access roads, substations, electricity transmission lines or temporary structures) that can damage fragile ecosystems, such as wetlands.

Scientific work shows that the exclusion of fishing activity, including small-scale (artisanal) fishing, from areas affected by offshore wind farms can have economic, social and environmental consequences on the fishing industry, the coastal communities that depend on this sector and society in general. Also, sounds, vibrations and electromagnetic fields from cables can affect exploited fish and decapods and decrease catches.

The authors of the study point out that the debate on the potential impacts of offshore wind farms on the landscape will be much more intense in the Mediterranean than in the northern European countries. According to his criteria, this has to do with the relevance of coastal and maritime tourism around this sea. For example, the projected wind farm in Cap de Creus would be built between 8 and 30 km from the coast, while in 2019 the average distance of all offshore wind farms installed in Europe was 60 km from the coast. In addition, in economic terms, a study carried out on the Catalan coast (Spanish Mediterranean) estimated a loss of income of up to 203 million euros per tourist season.

The study ends with recommendations for policymakers with the aim of “rationalizing the race for offshore wind proposals in the Mediterranean by energy companies”. These recommendations could be useful for the planning of offshore wind energy not only in the Mediterranean Sea but also in all areas of the world with fragile species and habitats, marine protected areas and/or valuable seascapes, such as the Australian and New Zealand coasts and the Canadian and US Atlantic.

In the first place, according to the scientists, the Precautionary Principle must be applied “to guarantee the highest level of protection of the environment through preventive decision-making in the event of obvious environmental risks, as is the case of the Costa Brava”.

The study also recalls that the mandates of the European Union in relation to the Blue Economy must be fulfilled. Scientists advocate considering “the ecosystem approach”, that is, not only taking into account the diversity of species and habitats, but also the ecological functions for different species (nursery areas, feeding areas, migration corridors, etc) and associated ecosystem goods and services.