The footprint of Global Change appears in a number of indicators. As evidence is growing, some paradoxes also raise. A intriguing one is why some ecosystems seem to follow more closely indicators of the global atmospheric dynamics (e.g. CO2 increase, yearly mean temperature) averaged over large territories (e.g. northern hemisphere) than the local record of weather and atmospheric deposition fluctuations at multi-year scales. According to causal chains, mechanisms must exist that explain this seeming paradox, likely related with different reaction or renewal characteristic times. One of the ecosystems where this phenomenon has been observed is in plankton from remote sites. This sub-project is included in a wider coordinated project that has the general aim of understanding how the fluctuations in the atmospheric dynamics are transferred to the plankton dynamics, and how much it depends on either in-lake or catchment processes. The general hypothesis of the sub-project is that, on the basis of our previous results, there are several underground hydrological compartments in the studied catchments that control the streamflow and determine the biogeochemistry of surface waters. Despite the catchments have a fast hydrological response the running waters have a long underground residence time. Thus, the catchment acts as a high-frequency filter regarding the transport of atmospherically deposited solutes, nutrients among them. The ultimate aim of this subproject is to understand the hydrological functioning of the catchments, with a special view on the underground cycle, and to see how does it modulate the transfer of the atmospheric influence through the catchment to streams and lakes. This is broken down in three objectives contributing to the coordinated project: i) to assess the influence of sub-surface water and groundwater to the generation of streamflow that feeds the lakes; ii) to estimate the rates of the biogeochemical processes that occur in the underground compartments and how this conditions the external nutrient load to the lakes; and iii) to estimate the role of low-frequency, extreme events on the mean internal and external nutrient loads. All together, this will help to provide an integrated version on the transfer of atmospheric fluctuations to the planktonic system in remote lakes that will help to understand the apparent paradoxes suggested by the observations. The experimental area is located in the Central Pyrenees, where our research group has a long experience. In particular, in the lake Redon and the catchment of the Sant Nicolau valley in the Aigüestortes i Estany de Sant Maurici National Park. 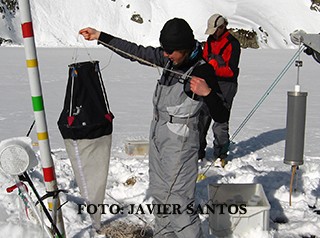