An international team of researchers led by the Institut de Ciències del Mar (ICM-CSIC) that has also involved experts from the Centre d’Estudis Avançat de Blanes (CEAB), the Institut Mediterrani d’Estudis Avançats (IMEDEA), the Instituto Español de Oceanografía (IEO), the Universitat de Barcelona (UB), the Universidad de Alicante (UA), the Universidad de Sevilla (US) and the Museo del Mar de Ceuta, has proven that, between 2015 and 2019, the Mediterranean experienced a series of marine heat waves that affected all regions of the basin, which resulted in recurrent mass mortality events throughout the period analyzed. The details are reported in a study recently published in the journal Global Change Biology.

According to the study, populations of some 50 species (including corals, sponges and macroalgae, among others) were affected by these events along thousands of kilometers of Mediterranean coasts, from the Alboran Sea to the Near Eastern coasts. The authors warn that the increased intensity and frequency of marine heat waves could be reshaping key coastal marine ecosystems.

“Specifically, the impacts of mortalities were observed between the surface and 45 meters’ depth, where the recorded marine heat waves were exceptional, affecting more than 90% of the Mediterranean surface and reaching temperatures of more than 26ºC”, explains the ICM-CSIC researcher Joaquim Garrabou, one of the authors of the study.

Key species, the most affected

Some of the most affected species are key to maintaining the functioning and biodiversity of the main coastal habitats. These include Posidonia oceanica meadows or coral assemblages, two of the most emblematic habitats in the Mediterranean.

This is the first study to assess the effects of mass mortalities on a Mediterranean scale over five consecutive years. In total, more than 30 research groups from 11 countries have participated, which has made it possible to note the incidence and severity of mortality in every corner of the basin. In fact, this is the most complete picture yet of the impacts of extreme warming events on marine organisms and ecosystems in the Mediterranean.

From the exception to the norm

The climate crisis is severely affecting marine ecosystems around the world and the Mediterranean is no exception. Specifically, the associated marine heat waves are causing massive mortality events in all coastal ecosystems of this basin as a result of their increased frequency, intensity and extent.

“Given this scenario, it is essential to know the relationship between the different biological responses of marine biodiversity and different levels of heat exposure”, points out the US professor Free Espinosa.

For their part, David Díaz and Emma Cebrián, researchers at the IEO and the CEAB, respectively, explain that “the high variability of observed responses among species and populations at very different spatial and temporal scales has undermined our ability to explore this relationship”.

Now, thanks to the temporal and spatial resolution addressed, it has been possible to demonstrate that there is a significant positive relationship between the duration of heat waves and the incidence of mortality events.

“Mass mortality events in the Mediterranean are equivalent to the bleaching events also observed consecutively in the Great Barrier Reef, suggesting that these episodes are already the norm rather than the exception,” highlights the UA professor Alfonso Ramos. 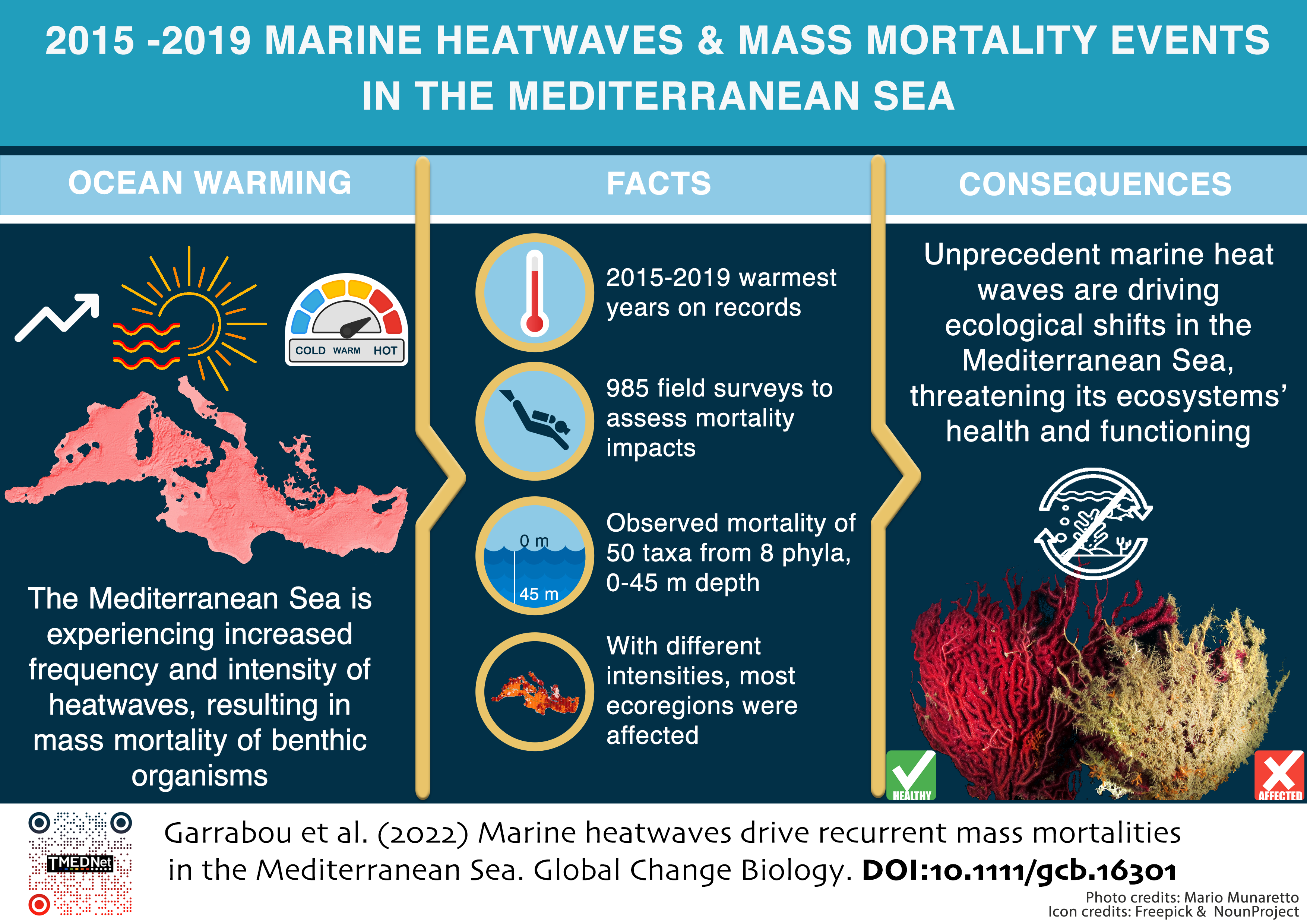 For all these reasons, the authors urge to strengthen coordination and cooperation at regional, national and international levels, as has been done in this work, in order to reach more effective management decisions to cope with the ongoing climate emergency.

The research has been carried out thanks to the support of the European projects H2020 MERCES, H2020Futurmares, InterregMED MPA-Engage, and the National Plan HEATMED project (RTI2018-095346-B-485 I00).